Nutcracker syndrome refers to the symptomatic extrinsic compression of the left renal vein presenting most commonly as flank pain and haematuria. While surgery remains the first-line treatment, stenting is gaining more acceptance and there are now several published case series. This article highlights the outcomes of left renal vein stenting in the setting of nutcracker syndrome.

First described in 1937, the classic nutcracker syndrome (NCS) refers to the entrapment of the left renal vein (LRV) between the superior mesenteric artery (SMA) and the aorta.1 While the mainstay of treatment remains surgery, which is supported by good long-term outcomes, LRV stenting is an emerging alternative to open repair.2 The first successful case of LRV stenting was described by Neste et al. in 1996, and was performed in a patient who had a history of pancreatic cancer treated with a Whipple procedure, chemotherapy and radiation.3

Although patients with NCS are typically young and healthy, avoiding laparotomy and its associated complications makes stenting appealing, especially in patients with recurrent stenosis following renal vein transposition.4 With much of the natural course of this disease being unknown with no established prevalence, case series are a valuable addition to the relatively sparse published evidence for the procedure.5,6 The purpose of this article is to highlight the outcomes of LRV stenting as described in recent case series.

LRV stenosis or NCS can have variable clinical presentations, with haematuria and flank pain being by far the most common presenting symptoms.7,8 A recent systematic review pointed towards an agreement among several investigators that an SMA branching angle of <35° is required in order to establish a diagnosis.9 However, the gold standard for diagnosis remains venography with a renocaval pullback pressure gradient of ≥3 mmHg.7 There is a subset of patients who have incidental findings of NCS or LRV stenosis on duplex/CT imaging; however, these people do not need intervention in the absence of clinical symptoms.10

Treatment should be tailored to the individual patient but non-surgical treatment should be attempted first for at least 6 months in all cases. In patients younger than 18 years, spontaneous remission is very common due to anatomic factors related to development and the distribution of body fat.7,11 Angiotensin-converting enzyme inhibitors and aspirin have also been used to improve orthostatic proteinuria and renal perfusion.12,13 Correction will be needed not only to ease persistent debilitating symptoms, but also to protect against possible complications, such as renal vein thrombosis, chronic glomerulopathy and compromised kidney function.8,14,15

Surgery remains the gold standard modality. A retrospective review of data from 36 patients who underwent several types of open surgery at the Mayo Clinic in the US demonstrated an overall resolution of symptoms exceeding 80%.2 The most commonly studied and performed surgery is LRV transposition. This is followed by gonadocaval bypass, SMA transposition, kidney auto transplantation and fibrous tissue resection at the aortomesenteric angle. Other much less commonly performed procedures are nephropexy, laparoscopic splenorenal venous bypass and external stenting of the LRV with a ringed polytetrafluoroethylene (PTFE) graft.7,16–18 However, surgery is not without complications and recurrent haematuria, LRV thrombosis and retroperitoneal haematoma have all been observed.16,19

Endovascular treatment of LRV stenosis has gained favour since its introduction in 1996, due to the ease of the procedure compared to open surgery, and its lower morbidity secondary to its minimally invasive nature. This procedure can often be done under local anaesthesia and sedation. Despite its minimal invasiveness, LRV stenting lacks robust evidence mainly regarding its durability. For this reason, as with any other intervention, the decision to undergo stenting must be preceded by a thorough discussion with the patient about the risks, benefits and unknowns of LRV stenting. It is important to stress the fact that these procedures should be performed on symptomatic patients only and by experienced clinicians in endovascular suites that have fixed imaging capability.5 Failures and complications, such as stent migration, can be frequent and can be accompanied by serious sequelae, especially if certain procedural rules are not followed.

There are no great differences in terms of technique among different institutions. In most procedures, the LRV is accessed through the right common femoral vein, with some physicians preferring to use the left common femoral vein or even the right internal jugular vein. While access site is determined by the physician’s preference, there is no reported difference in terms of complications.7,20,21 After selective catheterisation of the LRV, venography with the Valsalva manoeuvre should be performed to confirm the diagnosis. Intravascular ultrasound (IVUS) is also increasingly used to confirm a diagnosis through pullback imaging and to determine proper stent sizing.12 This has eliminated the need for the more traditional diagnostic pressure drop criterion of >3 mmHg across the stenotic lesion.

Balloon venoplasty has no role in treatment due to the persistent external compression that leads to recompression upon deflating the balloon. Large self-expanding 4–6 cm stents that are 14–16 mm in diameter are typically appropriate. Smaller diameters are not recommended due to reported cases of stent migration.22 The Wallstent (Boston Scientific) has been the stent used in the majority of cases, but novel dedicated venous stents are entering the market and may become more popular for this procedure.23

Complications of LRV stenting treatment include stent thrombosis, migration, deformity, erosion, risk of reintervention and risk of conversion to open repair.22,24,25 A retrospective study from China that included 75 patients demonstrated a migration rate of 6.7%. Migration sites included the vena cava, right ventricle, right atrium and the left side of the renal vein. The main reason behind that was inappropriate stent sizing.2,10,22,24–26 The risk of stent migration can be minimised by oversizing the stent diameter. While partial protrusion of the stent into the inferior vena cava did not seem to cause complications, distal landing beyond the first branch of the LRV had been suggested to reduce stent migration but this is not to be encouraged due to the long-term disruption of smaller branches by the continuous radial force of the stent.6,27

Experiences from the University of Pittsburgh Medical Center

The most recent large retrospective case series from the US was published by the University of Pittsburgh Medical Center featuring 18 patients (17 women; mean age 38.1 ± 16.9 years) who underwent endovascular treatment.5 It demonstrated fewer perioperative complications when compared to previously published series. Among the 18 patients underwent stenting of the LRV, five had previously undergone a LRV transposition and had recurrent symptoms (or no improvement) within 7 ± 4.9 months. Failure was defined as symptom recurrence or no improvement along with imaging evidence of severe renal vein stenosis.

The most common presenting symptoms were flank pain (n=15) and haematuria (n=10). Selective catheterisation of the LRV was performed through the right common femoral vein. Of the 18 patients, 13 (72.2%) noted improvement or resolution of symptoms at a follow-up of 41.4 ± 26.6 months. Of the five who did not have an improvement, three had previously undergone LRV bypass and two eventually needed renal autotransplantation. One of the remaining two women was later diagnosed with endometriosis, which can have a presentation similar to NCS. Haematuria resolved in 60%, which can be explained by the vascular changes resulting from chronic venous hypertension that cannot be reversed even with open surgery.5,16,19 Three underwent stent reintervention. The two-year primary and primary-assisted patency was 85.2% and 100% respectively.

No stent migration occurred, which highlights the importance of accurate stent sizing. This might have been influenced by the use of an IVUS in 61% of cases. Patients were started on dual antiplatelet therapy for 1–3 months and switched indefinitely to 81 mg aspirin.5 Figure 1 demonstrates the pre- and post-stenting imaging of a patient who underwent LRV stenting.

In a retrospective study including 61 patients in China with a median follow-up of 66 months, 59 patients noted improvement or resolution of symptoms within 6 months of LRV stenting. Postoperative complications included one stent migration to the hilar LRV, one stent migration into the right atrium, and one stent protrusion into the inferior vena cava. One perioperative complication of stent deployment in an LRV collateral was also reported.6

In another smaller Chinese case series, 30 patients underwent stenting of the LRV with a median follow-up of 36 months. Three months after stenting, complete resolution of haematuria and flank or abdominal pain was noted. No perioperative complications were recorded and two cases of stent prolapse into the inferior vena cava were found during routine follow-up at 12 months with no symptom recurrence or reintervention.27 Table 1 summarises the findings of the largest and most recent published series assessing outcomes of LRV stenting. 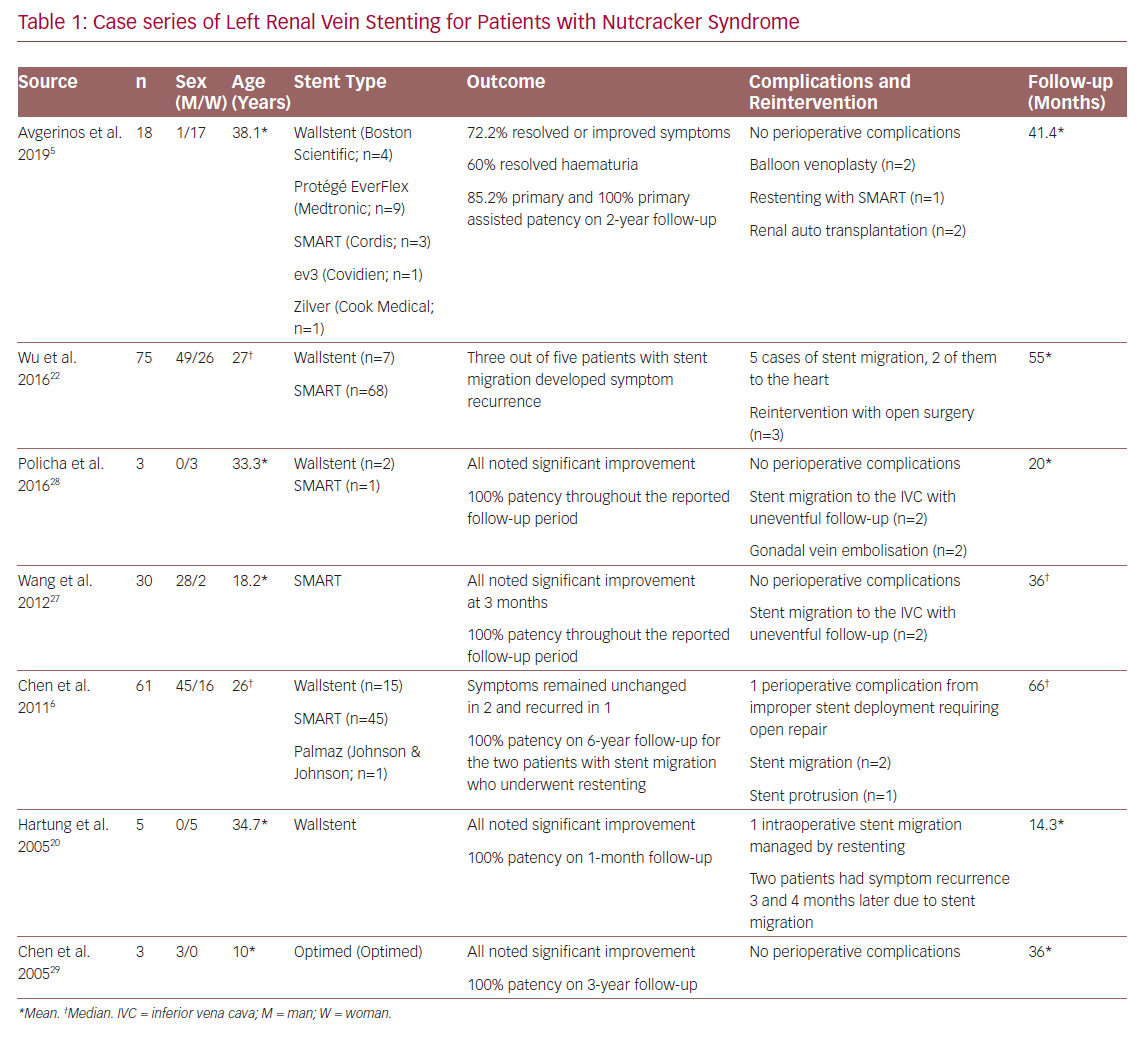 LRV stenting is a safe and effective treatment modality for treating NCS that is refractory to conservative management. The most common reported complication is stent migration, and this risk could be eliminated with the accumulation of experience and expertise. LRV stenting should not be recommended as the gold standard as there is a lack of long-term data which would raise concerns about using the intervention in younger, otherwise healthy patients. The establishment of a registry is crucial to determine long-term outcomes of LRV stenting for patients with NCS.