While the endovascular approach has been the treatment of choice for abdominal aortic aneurysm (AAA) repair in the modern era, open AAA repair remains a treatment option and may have a resurgence after the recent release of draft guidelines from the National Institute for Health and Care Excellence (NICE). Incisional hernia is a common long-term complication of open AAA repair and causes significant patient morbidity. As the number of patients undergoing open AAA repair increases, it is imperative that vascular surgeons are aware of and aim to reduce the complications associated with open surgery. This review article summarises current evidence, highlighting the risk factors for incisional hernia and the modern surgical techniques that can prevent complications.

Disclosure: The authors have no conflicts of interest to declare.

Abdominal aortic surgery has seen a significant shift over the past two decades, with increasing use of endovascular techniques compared with open surgery. In contemporary practice, an endovascular approach to aortic aneurysm repair is used in more than two-thirds of elective cases and now represents the treatment of choice in the emergency setting for ruptured aneurysms if anatomically suitable.1 Despite this, a draft National Institute for Health and Care Excellence (NICE) guideline for the diagnosis and management of abdominal aortic aneurysms, released in May 2018, has recommended open repair rather than endovascular aortic repair (EVAR) for unruptured infrarenal abdominal aortic aneurysms (AAA) on the basis of cost-effectiveness and long-term outcomes. It also recommended that EVAR should not be offered to patients with unruptured infrarenal AAAs who were not considered suitable for open AAA repair because of medical comorbidity. Open repair was also recommended as the choice for repair of ruptured aneurysm in men under 70 years of age or for people with complex aneurysms.2

Although these draft guidelines have generated controversy among the international vascular surgery community and are currently being debated, it is a strong possibility that they may be implemented in the UK. Therefore, this may increase the numbers of patients having an open AAA repair which will inevitably cause a rise in specific complications from this open procedure.

One of the most common long-term complications of open AAA repair is incisional hernia. Rates for this complication are reported to be as high as 38% and it is symptomatic in more than 80% of patients.3,4 Symptoms include abdominal pain and discomfort and it can lead to life-threatening complications including bowel strangulation, intestinal obstruction and/or perforation. In addition, patients with incisional hernias report significantly lower mean scores in physical functioning, cosmetic and body image scores when compared with patients without hernias.4 Repair of an incisional hernia is required in about 10% of patients.5,6 This article reviews the risk factors for incisional hernias in patients who undergo open repair AAA and it will consider the surgical techniques that vascular surgeons could consider at the time of surgery that could mitigate the risk of an incisional hernia after surgery.

AAA is an independent risk factor for incisional hernia after laparotomy. A systematic review in patients who underwent open AAA repair compared with patients undergoing laparotomy for aortoiliac occlusive disease (AOD) has reported an approximate threefold increase in risk for both inguinal and postoperative incisional hernia (OR 2.85; 95% CI [1.71–4.77]; p<0.0001 and OR 2.79; 95% CI [1.33–4.13]; p<0.0001, respectively).7

Both AAAs and abdominal wall hernias share common pathophysiological mechanisms including increased collagen breakdown caused by a protease/antiprotease imbalance. Elastin interposed between the smooth muscle cells of the tunica media and longitudinally arranged collagen in the tunica adventitia allow the aorta its structural elastic properties and strength. Collagen is the primary structural element of the adventitia and helps prevent expansion of the arterial wall beyond physiological limits during systole.10 Elastin and collagen metabolism is regulated by the aortic wall’s extracellular matrix (ECM). Imbalance between matrix metalloproteinases (MMPs) and tissue inhibitors of metalloproteinases (TIMPs) are thought to impair normal physiological aortic wall remodelling leading to aneurysm development. Several MMPs, including MMP2 and MMP9, have been implicated as the dominating proteolytic enzymes for inciting and propagating aneurysm development.11 This process is also implicated in the pathological formation of abdominal wall and inguinal hernias. Type 1 collagen is highly cross-linked and provides the abdominal fascia with its mechanical strength while type 3 collagen is less abundant, less cross-linked and offers less tensile strength to tissues. Type 3 collagen is eventually replaced with type 1 collagen during the stages of wound healing and remodelling. Similar to AAAs, the altered ratio of type 1 to type 3 collagen ratio may be a result of increased collagen metabolism caused by dysfunctional ECM activity. Studies of inguinal hernias have found an overexpression of degrading MMP2 and MMP9, as well as increased MMP1 and MMP13 activity in recurrent inguinal hernias.11.12

The European Hernia Society recommends using slowly absorbable suture material rather than non-absorbable sutures for continuous closure of midline abdominal wall incisions.13 These recommendations are based on results of systematic reviews.17,18,19 Although there is no difference in incisional hernia rate between the two suture types, there is an increased incidence of suture sinus formation and wound pain when non-absorbable sutures are used to close the midline fascia.18,19

The beneficial effect of a high suture length to wound length (SL:WL) ratio of at least 4:1 on reducing the incidence of incisional hernias in midline laparotomy wounds is well reported.20 In patients undergoing open AAA repair, the development of an incisional hernia is associated with a longer incision, longer operating time, and a SL:WL ratio of less than 4:1 at the time of index surgery.21

Laparotomy closure has been classically taught with ‘long stitches’ placed at least 10 mm away from the wound edge. Following contrary evidence from experimental studies, a short-stitch technique for midline laparotomy wound closure has more recently been proposed.22,23 The short-stitch technique consists of placing sutures 5–8 mm from the wound edge, 5 mm from suture to suture, including only the aponeurosis, which is thought to reduce trauma and complications of infection and excessive scarring. An RCT has suggested that there is a twofold risk of wound infection (OR 2.15; 95% CI [1.17–3.96]) and a fourfold risk of incisional hernia (OR 4.24; 95% CI [2.19–8.23]) when the long-stitch technique is used.23 These outcomes were affirmed by the Suture Techniques to reduce the Incidence of The inCisional Hernia (STITCH) trial, a multicentre RCT from the Netherlands. Patients in the experimental group underwent laparotomy closure using the small-stitch technique and reported a 1-year incisional hernia rate of 13% (compared with 21% in patients closed with the large-stitch technique) (OR 0.52; CI [0.31–0.87]; p=0.0131). The small-bite technique was, however, associated with a higher SL:WL ratio (5.0 [SD 1.5] versus 4.3 [SD 1.4]; p<0.0001) and a longer closure time (14 [SD 6] minutes versus 10 [SD 4] minutes; p<0.0001).24 Although this technique is not specific to abdominal wound closure post AAA repair, the findings may still be applicable.

A systematic review examining prophylactic mesh re-enforcement, specifically for patients undergoing open AAA repair via a midline laparotomy, has further demonstrated the benefit of this procedure. Interventions were heterogenous between the included trials with respect to the type of mesh used as well as mesh positioning relative to the fascia (i.e. sublay, onlay or within the rectus sheath).26 Meta-analysis demonstrated a significant reduction in the risk of incisional hernia after AAA repair when mesh reinforcement was used, compared with primary suture closure. There was no difference in re-operation rate and intraoperative or postoperative complication rates between the groups, and the pain scores were similar. A later trial, which included high-risk patients who underwent laparotomy for either AAA repair or had a BMI ≥27 kg/m2, found no difference in the rate of incisional hernia between onlay or sublay mesh positioning. There was, however, a higher frequency of seroma in the onlay mesh group (34 of 188) compared with primary suture (5 of 107; p=0.02) or sublay mesh reinforcement (13 of 185; p=0.02).27 In addition, there appears to be a significant increase in overall operative time (211 [SD 62] minutes versus 190 [SD 83] minutes, p<0.05) and time to close the abdominal wall (46 [SD 19] minutes versus 30 [SD 18] minutes; p<0.05) between the mesh and no mesh groups. Prophylactic mesh reinforcement of the abdominal wall after open AAA repair via midline laparotomy significantly reduces the risk of incisional hernia. Based on this data, patients undergoing open AAA repair should be considered high risk, and prophylactic mesh placement at the time of laparotomy closure should be performed routinely, unless there are concerns about patient instability, where the benefits of a more rapid abdominal closure would outweigh the increased risk of incisional hernia.

Based on current data, we recommend that vascular surgeons employ a transverse incision as a first line if suitable. Meticulous abdominal wall closure with a slowly-absorbable suture material and a long suture length to wound ratio of at least 4:1 should be carried out.21 The ‘short stitch’ technique of laparotomy closure, i.e. 5 mm deep, 5 mm a part, should be employed as it has demonstrated a significant reduction in the risk of developing an incisional hernia in patients undergoing elective laparotomy.24 This benefit may be even more significant in patients who undergo open AAA repair as they are at high risk of incisional hernia for many reasons.

Contemporary data suggests that prophylactic implantation of mesh may reduce the incidence of incisional hernias in at-risk patients, although mesh repair does increase operative time. We suggested this approach be performed routinely in patients undergoing AAA repair, unless patient instability necessitates a more rapid abdominal closure. With current vascular training models having minimal general surgical exposure, surgeons will need to be taught the technical skills to perform mesh repair.

Obesity is a consistent modifiable risk factor and weight loss should be encouraged during the surveillance period for AAA. Every centimetre reduction in thickness of abdominal subcutaneous fat will reduce the risk of incisional hernias. Weight loss will also profoundly reduces perioperative cardiovascular and anaesthetic complications.

Incisional hernias represent a significant cause of long-term morbidity after open AAA repair, often requiring surgical repair under general anaesthesia in a relatively high-risk group. The recent NICE guideline draft has the potential to prompt an increase in the rate of open AAA repairs and vascular surgeons must ensure they meticulously apply contemporary laparotomy closure techniques to minimise postoperative incisional hernias. This is particularly important in an era of subspecialist training programmes where junior surgeons may have had limited exposure to general surgery. 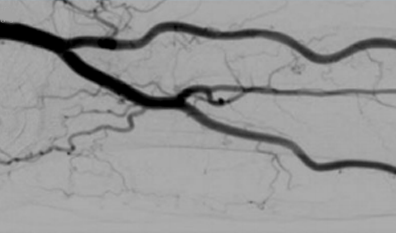 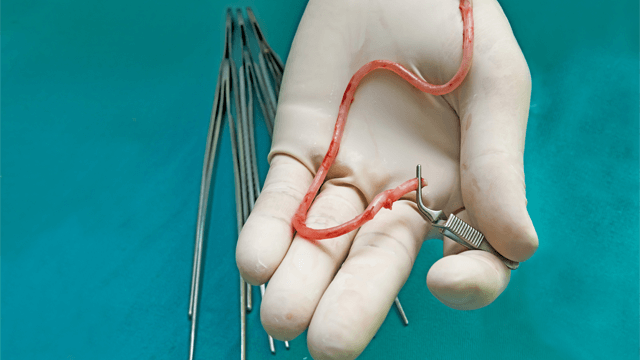 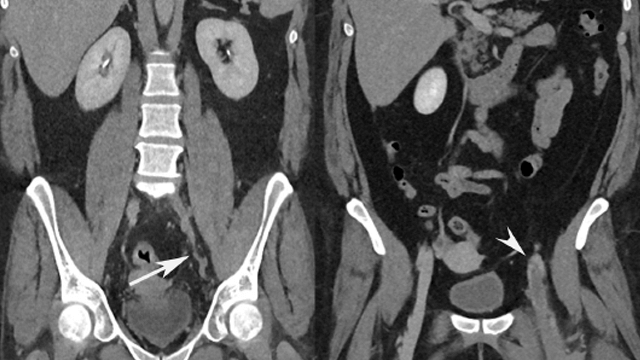