Isolated iliac artery aneurysms are an uncommon and usually asymptomatic pathology, accounting for 2 % of all intra-abdominal aneurysms.1 The common iliac artery (CIA) is the most frequently involved, with a rate of rupture in untreated cases of approximately 75 %.2

A potentially lethal complication of common iliac artery aneurysm (CIAA) rupture is the formation of a ilio-iliac arteriovenous fistula (IIAVF).3 While trauma accounts for the vast majority of presentations, spontaneous rupture into an adjacent vein is rare and occurs in fewer than 1 % of all CIAA presentations.3 Here we present a case of a spontaneous IIAVF following a rupture of CIAA.

A 75-year-old man presented to a peripheral hospital with a 2-day history of lethargy, malaise, anorexia, increased work of breathing and an episode of loss of consciousness.

His past medical history was significant for autobiographical memory deficiency but he denied a history of trauma or previous abdominal aortic aneurysm surgery.

On examination, the patient’s blood pressure was 91/54 mmHg, heart rate was 103 BPM and respiratory rate was 25 with an oxygen saturation of 96 % on room air. His abdomen was soft and non-tender with an evident pulsatile mass in the right iliac fossa with a thrill palpable into the right groin. A full complement of lower limb pulses was palpable with evident right-sided lower limb oedema. Electrocardiogram revealed inversion of T waves in the lateral chest leads. Bloods on presentation revealed acute renal failure (creatinine 283 μmol/l, urea 18 mmol/l) and evidence of myocardial injury (troponin-T 69 ng/L, B-type natriuretic peptide 199 pmol/l).

The patient was transferred to a tertiary referral centre and proceeded urgently to theatre for an endovascular repair. Following standard Proglide (Abbott Vascular) deployment, a short 10F Radifocus introducer II sheath (Terumo Interventional Systems) was advanced through the left groin. A long 9 F Flexor Ansel guiding sheath (Cook Medical) was initially advanced through the right groin in an attempt to negotiate the right CIAA. This was unsuccessful, and a snare was introduced from the contralateral groin to achieve successful cannulation. A Zenith Low Profile 24 mm x 84 mm aortic endograft main body (Cook Medical) was advanced through the left groin and deployed. The contralateral gate was cannulated and two Zenith Spiral-Z Iliac Leg Grafts 13 mm x 107 mm and 13 mm x 74 mm (Cook Medical) were deployed sequentially to seal into right external iliac artery. A Zenith Spiral-Z Iliac Leg Grafts 24 mm x 56 mm (Cook Medical) was deployed to seal within the left CIA. The overlap zones were moulded with a CODA balloon (Cook Medical).

The post-aortic endograft deployment angiogram revealed a Type 1b endoleak with flow into the right CIAA sac and persistent filling of the right CIV (Figure 2). A 10 mm x 57 mm BeGraft stent graft (Bentley) was used to bridge the right-sided iliac limbs. The completion angiogram revealed resolution of the Type 1b endoleak (Figure 2). On palpation of the abdomen intraoperatively, the previously demonstrated thrill had resolved. Proglide closure was performed for groin haemostasis.

Initial aortoiliac arterial duplex ultrasound performed 3 days postoperatively revealed a Type 2 endoleak from the right internal iliac artery (IIA) filling the residual right CIAA with outflow via the right CIV. Direct sac puncture and embolisation of branches of the right IIA was attempted with Amplatz plugs (Abbott Vascular) and Concerto coils (Covidien) but the aneurysmal sac was seen to be refilling (Figure 3). The decision was made not to stent the right CIV given the low resistance vascular bed, allowing the Type 2 endoleak to be decompressed via this route. 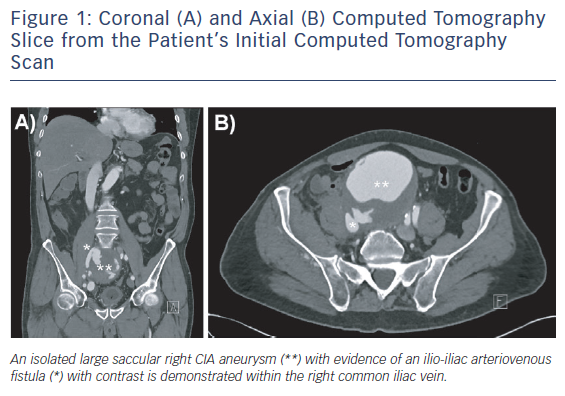 The patient’s recovery was otherwise unremarkable, and he was discharged following a 10-day admission with normal renal function (creatinine 103 μmol/L, urea 5.6 mmol/L) and resolution of his presenting symptoms.

On follow-up arterial duplex ultrasound at 6 and 12 months, a persisting Type 2 endoleak with decompression via the right CIV was found with no significant change in the residual aneurysm sac size (Figure 4). With no systemic consequences of the Type 2 endoleak, the patient continues to be managed conservatively and is enrolled in an ultrasound surveillance programme.

Isolated CIAAs account for 2 % of all intra-abdominal aneurysms. They are uncommon and often discovered incidentally due to symptoms resulting from compression to adjacent structures or at the time of rupture.1 Most spontaneous rupture of intra-abdominal aneurysms tends to occur into the intra- or retroperitoneal tissues. Rupture into an adjacent venous structure, as described in this case report, forms a very small subset of these patients.4,5 The spontaneous rupture of a CIAA into an adjacent venous structure creating an IIAVF accounts for fewer than 1 % of all ruptures in CIAAs.6

Trauma is usually the primary aetiology for presentation in intra-abdominal arteriovenous fistula, with a variety of causes including gunshot wounds, stab wounds and seat belt trauma. Other causes such as malignancy, intervertebral disc surgery and other iatrogenic injuries have also been described.2,3,7

The development of an IIAVF results in an anomalous diversion of blood flow from a high-resistance arterial circuit to a low-resistance venous circuit, resulting in a decrease in total peripheral resistance and an increase in venous resistance, venous pressure and blood volume.8 This results in an elevated heart rate, with increased stroke volume, cardiac output and cardiac work overall manifesting as a triad of clinical findings: 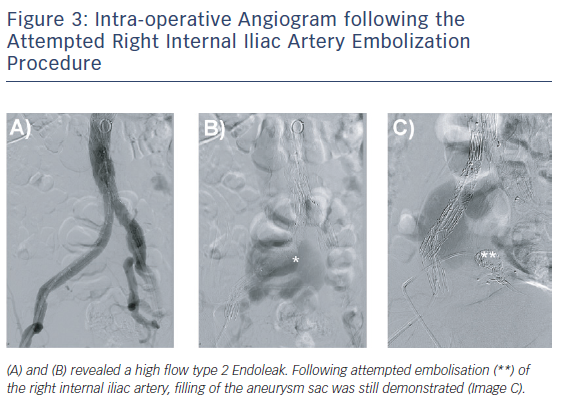 However, this triad of symptoms is present in only 20–50 % of reported cases, with their occurrence dependent on factors such as origin, size and location of the fistula, patient age and the presence of concomitant cardiac, liver and renal disease.6–8

IIAVFs are potentially life threatening and warrant urgent intervention with the primary goals of management being re-establishment of arterial continuity and ideally, closure of the fistula.10

Historically, IIAVFs were managed with open surgical repair, usually with a Dacron interposition graft and direct suturing of the fistula from inside the aortic lumen.8,9 However, this was often a technically challenging procedure, given the position of the CIAA within the pelvis. Furthermore, it was also associated with a perioperative mortality as high as 67 % due to the inevitable major blood loss associated with venous bleeding control, embolisation of aneurysmal debris through the arteriovenous fistula and also physiological stress secondary to the pre-existing hyperdynamic state with cardiac decompensation.1,9,12 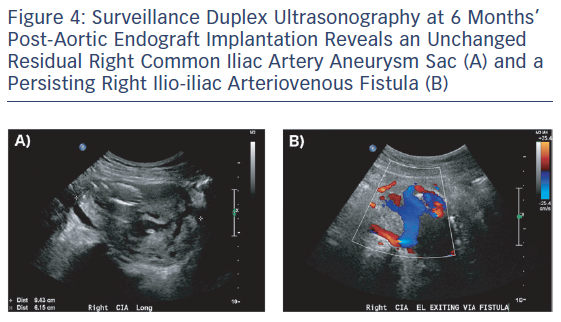 Endovascular repair has become increasingly common, given it is less invasive and has a lower risk of major intra-procedural blood loss. Whether it can be carried out depends on favourable anatomy and the haemodynamic stability of the patient. Endovascular repair is associated with reduced in-hospital and 30-day mortality, as well as length of inpatient stay compared to open surgical repair.1,4

The predominant concern following endovascular repair is communication between the aneurysm sac and adjacent vein resulting in a persistent Type 2 endoleak.12

As demonstrated in this case study, we hypothesise that this persistent communication is unlikely to result in sac expansion because of the low-pressure venous outflow resistance following endovascular repair. Furthermore, given the low flow state present postoperatively, it is likely that the hyperdynamic effects of a high-output fistula will not be clinically significant following restoration of normal cardiac status and renal function.

While IIAVFs can be managed conservatively, long-term surveillance is recommended.13,14 The continued presence of an endoleak following endovascular repair potentially places the patient at risk of complications including systemic cardiac manifestations and aneurysm sac enlargement.13 Cardiac failure in particular, in the context of a persistent endoleak, occurs as a result of reduced systemic vascular resistance, with increased cardiac output eventually leading to ventricular remodelling.15 Venous stenting of the adjacent vein has been described to help exclude AVF but presents risks of graft collapse, thrombosis, migration and side branch occlusion.13.

The formation of an IIAVF following a spontaneous CIAA rupture is a rare clinical phenomenon complicated by the heterogeneity of clinical presentation. Due to the lower mortality and lower rates of complication that have been observed compared to open surgical repair, endovascular repair of IIAVF following CIAA rupture should be seen as a safe and viable form of management.