The anterior accessory saphenous vein (AASV) is a common source of primary and recurrent lower extremity varicose veins. Reflux in the AASV can occur independently or simultaneously with great saphenous vein (GSV) reflux. A number of published reports describe recommendations and treatment of symptomatic refluxing AASVs, but descriptions of combined treatment are sparse. Treatment options for ablation of the AASV include both thermal and non-thermal techniques, and results are equivalent to ablation of the great and small saphenous veins. Although not commonly performed, concomitant ablation of the AASV and the GSV is effective and safe, and can be accomplished with minimal additional time. Concomitant treatment is an appropriate option that should be discussed with the patient.

Disclosure:The author has no conflicts of interest to declare.

The truncal vein on the anterior aspect of the thigh has several names and abbreviations and is a common source of both primary and recurrent lower extremity varicose veins. Treatment options are similar to that for the other superficial truncal veins and can sometimes be performed concomitantly.

The anterior accessory saphenous vein (AASV) or, as it is formally known, the anterior accessory of the great saphenous vein, is a clinically important source of primary and recurrent varicose veins.1 The anatomy of the AASV was examined with ultrasound in a comprehensive paper by Cavezzi et al.2 Of course, there is significant variation in the venous anatomy of the lower limb, but the AASV typically lies within a fascial compartment and forms an ‘eye sign’ on ultrasound, similar to the great saphenous vein (GSV). It usually lies anterior and lateral to the GSV as it ascends the thigh. The terminus of the AASV is also variable, but most commonly it joins the GSV within 2 cm of the saphenofemoral junction (SFJ).2 The anterior thigh circumflex vein is a tributary of the AASV (although sometimes the GSV) and courses superomedial in the thigh.

The vein under discussion has several names and abbreviations. It has been called the anterior accessory GSV, the accessory saphenous vein and the AASV.3–5 This can lead to some confusion, and perhaps is one of the reasons why insurance companies often do not routinely cover treatment of this vein, given that it is seen by them as being only an ‘accessory’ to the GSV and therefore is downplayed as not important. One suggestion is to eliminate the ‘accessory’ designation, and name this the anterior saphenous vein. That designation is for the future and beyond the scope of this article. For the sake of consistency in this article, it will be referred to as the AASV.

Schul et al. published a recent paper examining the importance of the AASV in clinical practice, using data from the American Vein and Lymphatic Society PRO Venous Registry.8 Patients in the study were divided into two groups: the primary group had no prior vein treatment, and the progressive group had a superficial venous intervention at some previous point. There were no demographic differences between the groups. The authors compared patients with reflux in the GSV and those with reflux in the AASV. They found that reflux in the AASV is common in patients with both primary and recurrent disease, has similar disease severity compared with GSV reflux, and has a higher incidence of superficial thrombophlebitis compared with the GSV.8 It therefore should be considered equivalent to the GSV and small saphenous vein (SSV) when considered for intervention and reimbursement.

Endovenous ablation, either by thermal techniques or ultrasound-guided foam sclerotherapy, of the AASV is generally not commonly performed. Treatment of the AASV ranges from 3.8% to 9.8% of truncal superficial veins ablated in several series.9,10

Theivacumar et al. examined endovenous laser ablation (EVLA) of the AASV in patients with isolated AASV reflux and a competent GSV and compared them with a group with EVLA of the GSV.3 They found that EVLA of the AASV would abolish SFJ reflux and had equivalent improvement according to Aberdeen varicose vein symptom severity score, and patient satisfaction when compared with EVLA of the GSV.3 Cavallini et al. published a report of nine incompetent AASVs treated with EVLA and found that the venous clinical severity score improved from a mean of 3.2 before intervention to a mean of 0 at 17 months.11 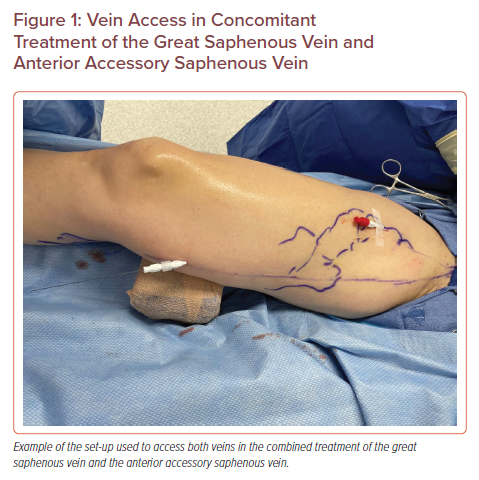 One explanation for this could be provided by an elegant study by Uhl et al.14 They dissected 400 limbs in 200 fresh cadavers and found lymph nodes between the GSV and the origin of the AASV, and identified dilated lymph node venous networks in approximately 15% of dissected cadavers.14 Another study investigated AASV reflux over time after radiofrequency ablation of incompetent GSVs and found that reflux in the AASV increased from 2% at baseline to 32% at 4 years.15

Baccellieri et al. examined the role of anatomy of the AASV at the SFJ and junctional reflux as a risk for recurrent varicose veins. Patients in group A had junctional (SFJ) and GSV reflux on ultrasound, while group B patients had only GSV reflux. After undergoing radiofrequency ablation of the GSV, a higher rate of recurrent varicose veins at 3 years was found in group A patients, and a direct confluence of the AASV at the SFJ was found to be a negative predictor for recurrent varicose veins.16 Attempting to mitigate such anatomic factors in recurrences after GSV endovenous ablation, Spinedi et al. published a report using a radial emitting laser fibre positioned at the SFJ, and had only one case of endovenous heat-induced thrombosis (EHIT) class 2 (0.8%) and one EHIT class 3 (0.8%). Although no follow-up information concerning recurrence was obtained, they concluded that the procedure is feasible and safe.17

After thorough patient evaluation, including symptom and venous history, physical examination, and duplex ultrasound examination, if documentation of both GSV and AASV reflux has been identified, the decision to treat sequentially or concomitantly must be made. If treatment of both at the same time has been determined to be optimal for the patient, then one can proceed accordingly. Both veins are mapped with duplex ultrasound prior to prepping the leg.

The author proceeds with ablation of the GSV first. Given that the tumescent anaesthesia for the first vein ablation may compromise access to the second vein, it is suggested to gain access to both veins with a micro puncture kit and 4 Fr sheath, and instil the planned second vein sheath with injectable saline (Figure 1). After ablating the first vein (usually the GSV), attention is turned toward the second vein. Ablating the AASV after the GSV should add no more than 10 minutes to the procedure. Compression after the ablations should follow the recently published guidelines.18

Most published studies concerning ablation of the AASV describe sole treatment of the AASV, or group the results with ablation of the GSV and SSV. A case report of combined treatment has been published.19 The author’s experience with combined treatment of both GSV and AASV is similar to others, that is to say, not very extensive. Eleven patients were treated concomitantly with 1,470 nm laser (0.67% of ablations): five of those patients also had concomitant phlebectomy, one had phlebectomy at a later date, and five patients required no further treatment. The average length of the treated AASV was 12.7 cm (range, 7–26 cm), and there were no instances of EHIT or deep vein thrombosis in those patients.20

An interesting concept has been proposed to potentially treat a non-refluxing AASV concomitantly with ablation of a refluxing GSV in order to decrease the recurrent varicose veins that would arise from a future incompetent AASV.16,21 However, the 2020 appropriate use criteria state that ablation of AASV with no reflux, but GSV with reflux (CEAP classes 2–6) is rarely appropriate and ablation for a vein with no reflux is never appropriate.22

As all vein practitioners know, the AASV can be the source of primary varicose veins in the setting of a normal, competent GSV. A number of health insurance payers in the US will not approve treatment of an AASV unless the GSV has been previously treated. This creates difficulties for the patient and practitioner when the GSV is normal, usually requiring repeated appeals for treatment.23

The American Venous and Lymphatic Society published guidelines for the treatment of refluxing accessory saphenous veins in 2017. The recommendation was that symptomatic refluxing accessory saphenous veins be treated with thermal ablation or ultrasound-guided foam sclerotherapy to reduce symptomatology, with a recommendation grade of 1C. It also stated that further studies concerning the management of isolated accessory vein reflux are not necessary.25

The AASV is a common source of both primary and recurrent lower extremity varicose veins and has been shown to be clinically equivalent to the GSV in terms of symptoms and the relief of those symptoms after treatment. Combined treatment of the AASV and GSV is not often performed, but if concomitant reflux is identified in both the AASV and GSV on duplex ultrasound, the decision to perform staged or concomitant ablation of both truncal veins may be dictated by insurance companies, or warrants, at the very least, discussion between the provider and patient. 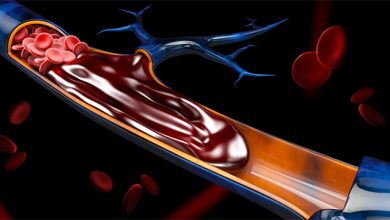 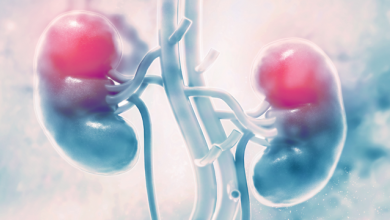