Although type 2 endoleaks are considered a benign finding after endovascular aortic repair (EVAR), they may cause expansion and pressurisation of the aneurysmal sac.1 Thus, type 2 endoleaks are usually followed via imaging: annually for non-expanding aneurysmal sacs and every 6 months in the case of sac enlargement, recommending treatment when sac enlargement is noted.2 Potential risk factors such as persistent type 2 endoleaks, large inferior mesenteric artery (IMA), and the use of antiplatelet drugs have been related to sac growth in that setting.3 We have encountered two abdominal aortic aneurysms treated with EVAR and chimney EVAR (ch-EVAR) in which delayed aneurysmal sac re-expansion was observed in control CT angiography (CTA).

A 68-year-old man experienced sac re-expansion in post-ch-EVAR follow-up. He had undergone ch-EVAR 7 years previously and follow-up imaging over the years after the procedure had shown complete shrinkage of the aneurysmal sac without any endoleak. After 6 years, the CTA showed a type 2 endoleak originating from the inferior mesenteric artery (IMA), causing the sac re-expansion (Figure 1). The positions of the stent graft and the chimney grafts were stable, and there was no evidence of aortic stent graft migration or type 1A/1B endoleak. The expansion rate was about 1 mm within 6 months, so inferior mesenteric artery (IMA) embolisation was performed over an 0.014-inch wire through a retrograde approach via the Riolan arch. A microcatheter was inserted into the ostium of the IMA, and Onyx (Medtronic) was injected to induce thrombosis (Figure 1). The 6-month CTA showed stable aneurysm sac diameter without any further increase.

A 70-year-old man was found to have aneurysmal sac re-expansion in post-EVAR follow-up imaging. The aneurysm had been excluded successfully with an Endurant II stent graft (Medtronic Endovascular). There was no endoleak post procedurally or during the first 4 years of follow-up, and there was a significant reduction in the size of the aneurysmal sac. However, his latest CTA showed sac re-expansion, along with a type 2 endoleak from a lumbar artery and IMA in delayed-phase images.

The type 2 endoleaks had not been noted in previous imaging studies and were considered responsible for the aneurysmal sac enlargement (Figure 2). In this case, IMA was used to access the aneurysmal sac and then embolise (retrograde approach) with coils and Onyx. A follow-up CTA after 6 months showed stable sac size without further growth.

The two cases of new onset type 2 endoleak after successful chEVAR and EVAR described here did not seem to relate to the employed therapeutic approach. The endoleak-free period with complete sac shrinkage was 6 years in the first case and 4 years in the second. There were no signs of systemic infection in laboratory evaluations and in both cases the IMA was the feeding vessel. The reason for the reperfusion of the IMA that led to the new delayed endoleak onset of the two presented cases was unknown. 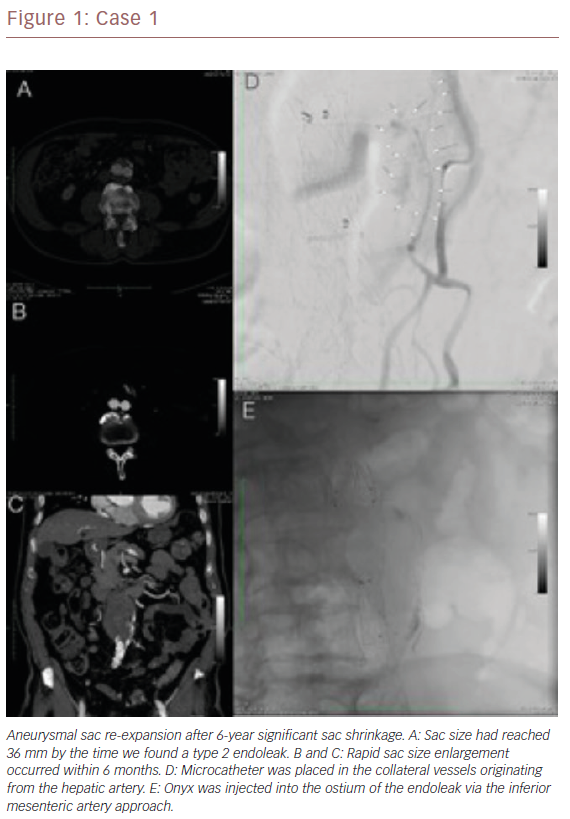 Both cases were successfully treated with retrograde use of Onyx and ostial embolisation. However, Onyx material causes CTA artefacts which preclude further endoleak visualisation. Thus, after Onyx embolisation, follow-up is limited to aneurysm sac diameter trace.

EVAR is now the dominant mode of treatment for abdominal aortic aneurysms. Although multiple observational and randomised clinical studies have reported consistent early survival benefits for the endovascular strategy, the late survival benefit is less promising.5,6 Aneurysmal sac expansion is one of the most important factors influencing late survival.7 Endoleaks are the main causes of sac expansion.8 Compared to type 1 and type 3 endoleaks, type 2 endoleaks are usually regarded as a benign finding and are mostly managed conservatively.8,9 Three clinical courses of the aneurysmal sac have been described in the presence of a type 2 endoleak: shrinkage, stability or expansion, and it is the third scenario which needs re-intervention.8

The rate of type 2 endoleaks during 1-year follow-up has been estimated to be 10 to 20% in various clinical reports.7 Only 1% of patients with type 2 endoleaks experienced aortic rupture; sac expansion is an important predictor of this.10

The Society of Vascular Surgery recommends control CTA at 1 and 12 months after EVAR. An additional imaging follow-up is necessary if there are abnormal findings on the first CTA or during the EVAR procedure.10 Thereafter, annual CTA is recommended if no sac expansion, endoleaks or device malposition are observed. CTA can be replaced by Doppler ultrasound after the first year if there have been no complications.10 Although recent guidelines may restrain the number of post-EVAR CTAs, the surveillance adherence rate is still poor, with Garg et al. finding that only 43% of patients received complete follow-up, and of those with incomplete surveillance, 64% had long gaps in imaging.11 Patients experiencing sac expansion, late endoleaks, and re-intervention had a higher rate of poor adherence.11 Inaccessible CTA, cost, contrast nephropathy and radiation exposure are among the most notable factors contributing to poor adherence.12 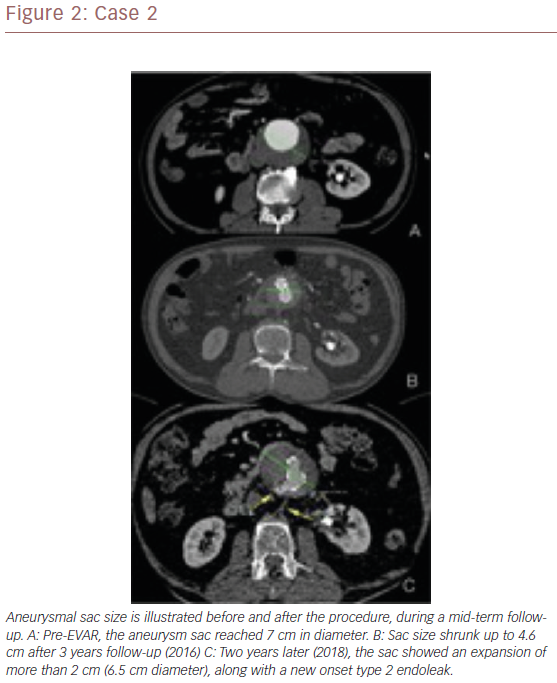 These two cases demonstrate the likelihood of late sac growth despite significant shrinkage during follow-up. Consequently, even though there is a tendency to reduce imaging after adequate sealing and aneurysmal sac shrinkage is observed, post-EVAR surveillance cannot be completely halted.

CTA is a highly sensitive and specific method, which is widely accepted and employed for control after endovascular treatment. However, it entails the use of contrast medium and radiation, which have the potential side-effects of contrast-induced nephrotoxicity and malignancies from cumulative radiation exposure. These risks can be avoided by using magnetic resonance angiography and contrast-enhanced duplex ultrasound, but these methods require expertise for interpretation.13 Sac expansion can be diagnosed by Doppler ultrasound, while more advanced imaging can be used in cases with a complicated course (such as sac enlargement).14 This modification in imaging surveillance has been suggested in recent literature, and offers the additional benefit of cost reduction.12,15

Aneurysmal sac re-expansion after long-term shrinkage can be detected during follow-up, independent of the treatment approach for abdominal aortic aneurysm. The cases we have presented here highlight the importance of ongoing surveillance after EVAR.