This article demonstrates a less-invasive combined surgical and endovascular alternative approach in a case in which an excessive thrombotic formation in the infrarenal aorta caused occlusion of the iliac artery and the ipsilateral crural arteries. A 51-year-old man was admitted to the authors’ hospital with symptomatology of acute lower limb ischaemia. He had undergone endovascular treatment with placement of kissing stents in the common iliac arteries 2 years previously. A CT angiography scan revealed an extensive thrombus formation in the entire infrarenal aorta occluding the distal infrarenal aorta, the iliac artery and the crural arteries. He underwent a hybrid approach, with exposure of only the right common femoral artery and over-the-wire embolectomy of the infrarenal aorta and the iliac artery, and after the restoration of the inflow, an embolectomy of the peripheral vessels was carried out. To cover the residual aortic thrombus and to restore the severe in-stent restenosis of the previously deployed bare stents, three covered balloon-expandable stents were deployed in kissing technique. The patient was discharged on the fourth postoperative day with palpable peripheral pulses. Combined surgical and endovascular techniques minimise the operative trauma and length of hospital stay for the patient, successfully restoring the perfusion in a physiological manner.

Excessive partial or total thrombotic obliteration of the aortoiliac segment represents a challenging clinical entity. In cases of surgical repair, infrarenal cross clamping of the aorta is associated with risk of thrombus embolisation in the renovisceral aorta.1 An alternative approach with extra-anatomic bypass from the axillary artery to the common femoral artery (CFA) also carries a risk of infection as a result of the subcutaneous cannulation and poorer patency.2 In cases of additional popliteo-crural involvement with severe clinical symptoms, such as rest pain, paraesthesia and paralysis, the treatment is demanding. The aim of this article is to demonstrate a less-invasive combined surgical and endovascular alternative approach for a patient who presented with an excessive thrombotic formation in the infrarenal aorta, occlusion in the entire iliac artery and additional ipsilateral involvement of the crural arteries.

A 51-year-old man was admitted to our hospital complaining of rest pain in his right leg and paraesthesia. Physical examination revealed symptoms of acute artery occlusion, including lack of pulses, paraesthesia, rest pain and paralysis of the right foot. The patient was a heavy smoker and reported a history of chronic misuse of drugs and analgesics. He had undergone deployment of a balloon-expandable bare-metal stent into the common iliac arteries 2 years previously. CT angiography showed an excessive thrombus formation in the entire infrarenal aorta with occlusion of the distal infrarenal aorta, the entire iliac artery and the crural arteries. The deployed bare-metal stents showed a bilateral compression with in-stent restenosis and subtotal occlusion, especially in the right side. Informed consent for publication of this case report was obtained.

After administration of general anaesthesia and cut down to the right groin, exposure of the CFA was obtained. On the contralateral site, puncture of the CFA was performed and a 5 Fr sheath was placed. The right common iliac artery (rCIA) occlusion was cannulated with a 0.018-inch angled Glidewire® (Terumo). After advance of a Quick CrossTM Support Catheter (Spectranetics), the 0.018-inch wire was exchanged with a 0.035 inch stiff wire. Figure 1shows the stenosed infrarenal aorta as a result of excessive thrombus formation and the complete occlusion of the right iliac artery and crural vessels. After heparinisation with 5,000 units, an over-the-wire embolectomy was performed with a Fogarty balloon from the infrarenal aorta to the iliac artery through the occluded right common iliac stent. Simultaneously, a balloon 10 mm in diameter (ev3, Medtronic) was advanced and inflated in the orifice of the left common iliac artery to protect the left limb for peripheral embolisation during the embolectomy (Figure 2). A blood flow restoration on the right limb was immediately achieved. Angiography revealed a severe in-stent restenosis of the right side. To cover the residual thrombus formation of the infrarenal aorta and to treat the in-stent restenosis – especially of the right bare-metal stent in the common iliac artery – three covered balloon-expandable stents were deployed, 8 mm × 59 mm (Advanta V12, Getinge) in the kissing technique and 38 mm long in the distal rCIA (Figure 3). Angiography showed complete exclusion of the thrombus formation with restoration of the in-stent stenosis of the previously deployed iliac bare-metal stents. The pulses in the groin were palpable. 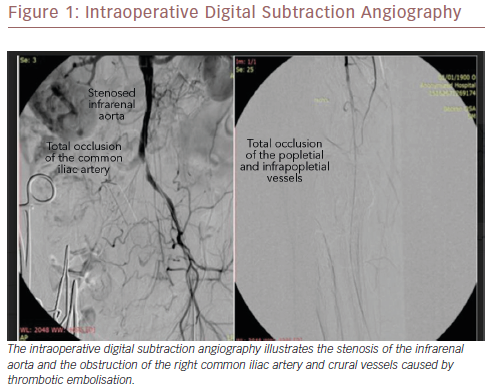 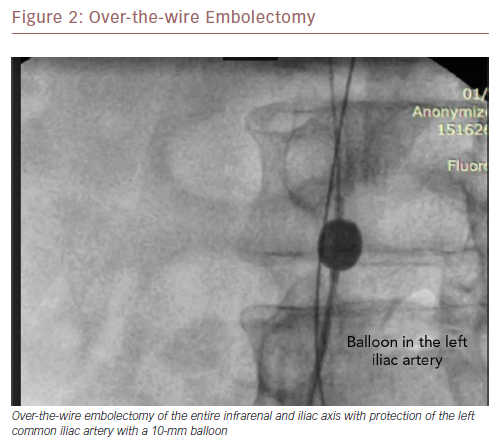 The next step was to restore the peripheral perfusion of the right lower extremity. We changed the destination of the short sheath and cannulated the occluded crural arteries with a 0.014-inch wire (ChoICE PT, Boston Scientific). Additionally, we performed an over-the-wire embolectomy with the Fogarty catheter. This was repeated four times. The completion angiography showed two patent crural vessels with peripheral spasm in the peroneal artery (Figure 4). For this reason, we administered 0.5 ml recombinant tissue plasminogen activator (Actilyse®,Boehringer Ingelheim) superselectively. We closed the arteriotomy of the CFA with 5-0 Prolene® (Ethicon) sutures and, at the end, the fascia of the groin. By the end of the operation, the patient had palpable peripheral pulses. 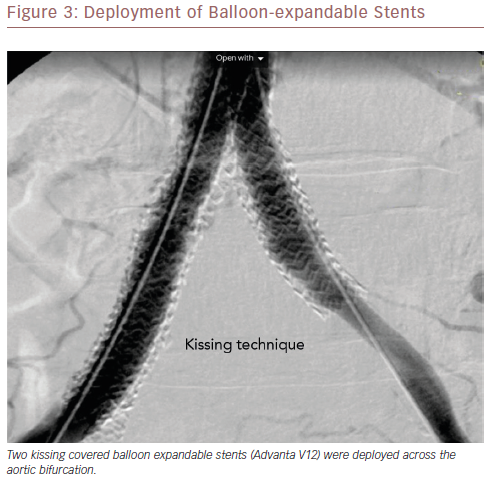 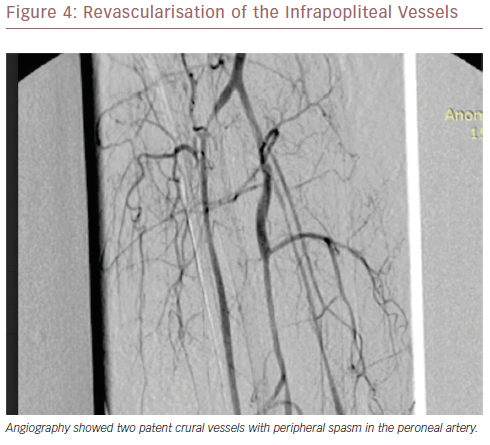 The operation was performed in a hybrid angiosuite room (Siemens Artis Zee). Meticulous clinical examination and estimation of creatinine kinase values were performed without evidence of limb-threatening compartment syndrome. The patient had an uneventful postoperative course and was discharged on the fourth day after the operation. The anticoagulation regime – because of the excessive thrombus formation – was warfarin and 75 mg clopidogrel daily for 6 months, and lifelong monotherapy with clopidogrel.

Acute lower limb ischaemia caused by aortoiliac and infrapopliteal thrombotic occlusive disease represents a challenging clinical entity requiring urgent and invasive treatment. Traditionally, the treatment option was open surgical repair including aortofemoral or axillofemoral bypass, which are associated with relatively high perioperative morbidity and mortality.3–4 Moreover, the invasiveness and risk of possible thrombotic embolisation in other vascular territories as a result of clamping of the aorta and manipulations during vessel exposure remain remarkable limitations.1 In particular, in cases of axillofemoral bypass placement, additional issues such as infection and poorer patency reflect significant drawbacks especially for a young patient without adherence, as in our case.2

The preferred approach represents an alternative modality combining less invasive means. The excessive thrombotic formation in the entire infrarenal and iliac axis with concomitant popliteo-crural occlusion highlights the challenge of this pathology. After protection of the left iliac-femoral artery with a 10 mm balloon catheter we performed a successful over-the-wire open thrombectomy of the entire right iliac artery, restoring the perfusion to the occluded iliac segment. Figure 3 shows the patent iliac axis with a severe residual stenosis of the right common iliac stent. Additionally, we restored the severe in-stent stenosis – especially of the right stent – with placement of balloon-expandable covered stents such as the Advanta V12 in kissing technique. The use of covered devices was preferred because of the risk of peripheral embolisation of the thrombus formation. The inflow was significantly improved. The literature describes promising performance of balloon-expandable covered stents in similar conditions with optional additional placement of a 16 mm Advanta device in the infrarenal aorta, also known as the Covered Endovascular Reconstruction of Aortic Bifurcation technique.5

The peripheral perfusion was restored by use of hybrid techniques, such as an over-the-wire embolectomy, to have the option of additional use of endovascular means, including balloons or stents in case of dissection and/or residual stenosis. The performance of the operation in a hybrid angiosuite room enabled additional angiographic evaluation of the revascularisation. The administration of local lysis decreased the peripheral spasms of the vessels and angiography showed all three crural vessels were patent.6

To the best of our knowledge, this is the first report referring to the treatment of such an excessive acute thrombotic lesion of the entire infrarenal arterial system of the right side by common femoral cut down and use of hybrid techniques. We have demonstrated that successful endovascular repair is possible in these critical situations and may be safer and associated with fewer complications than the open approach.

Combined surgical and endovascular techniques minimise operative trauma, duration of the operation and length of hospital stay for the patient. A surgical repair such as placement of an aortofemoral bypass in case of stent-graft occlusions and failed repeat endovascular recanalisation is still available, the restoration of the blood flow has a more physiological manner compared with an extra-anatomic axillofemoral bypass placement. Performance of these techniques in a hybrid angiosuite reflects the modern character of the vascular surgeon offering both options as complementary modalities. 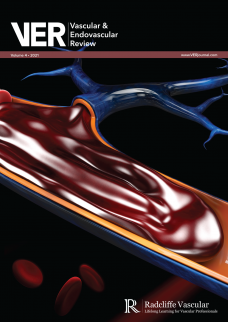